A raw block of wood spins on the lathe as Scott’s steady hand holds the chisel. Shavings fall to the floor as the wood begins to take its intended shape. The 17-year-old at the Department of Juvenile Justice is making a bomb. Don’t worry - no federal crime is being committed. This “bomb” is different.

The bomb is for a World War II-era B-25 Bomber recovered from Lake Greenwood, South Carolina in 1983. The aircraft is now in a hanger at the Hamilton-Owens Airport in Columbia, under the care of the South Carolina Historic Aviation Foundation (SCHAF). The 75-year-old bomber is undergoing a restoration so it can be placed in a future Aviation Museum. One problem – You can’t have a museum-worthy bomber without bombs!

It turns out these wooden “bombs” aren’t the destructive kind most people imagine. They were used as “float lights” – a type of flare used for navigation purposes. The B-25 would drop the float light on to the ocean surface, which would then release smoke. The navigator would then use the smoke to determine wind drift.

Ron Skipper (above, second from left) is the SCHAF Restoration Manager. He says his team did not have the expertise to replicate this payload and was excited to learn that DJJ’s youth possessed the necessary skills to complete the project. Soon after, a partnership was formed.

Scott, who is honing his skills in DJJ’s Carpentry Program, got right to work on 16 replicas.

“To walk into the carpentry class and to see Scott’s face light up with enthusiasm gave me goose bumps,” explained Skipper. “The day he is able to visit the museum to see his work on display is going to be somewhat of a homecoming. It will be a very emotional moment to put him inside the plane and say ‘Here is what you did.’”

“The good thing about working on this project and other carpentry projects is that when I go home I have positive things to focus my attention toward,” says Scott. “I’m learning a trade and can then help others in my community learn this trade as well.”

The light flares aren’t the only military-related project DJJ carpentry students are working on.  Scott and other youth are handcrafting 30 pens made of Purpleheart wood to send to troops in the Middle East.

“I am away from my family right now and I feel like we have that one thing in common,” explains Scott. “I hope the soldiers can use these pens to write to their families. I would normally look at a pen and think nothing of it, but these are special. They tell a story.”

Like many other youth at DJJ, Scott is navigating his way toward a more productive future, and project’s like these are helping illuminate his path.

The B-25 bomber turns 75 this year. The SCHAF will celebrate with an October 14th Open House. The event will also serve as a status report on the plane’s restoration. 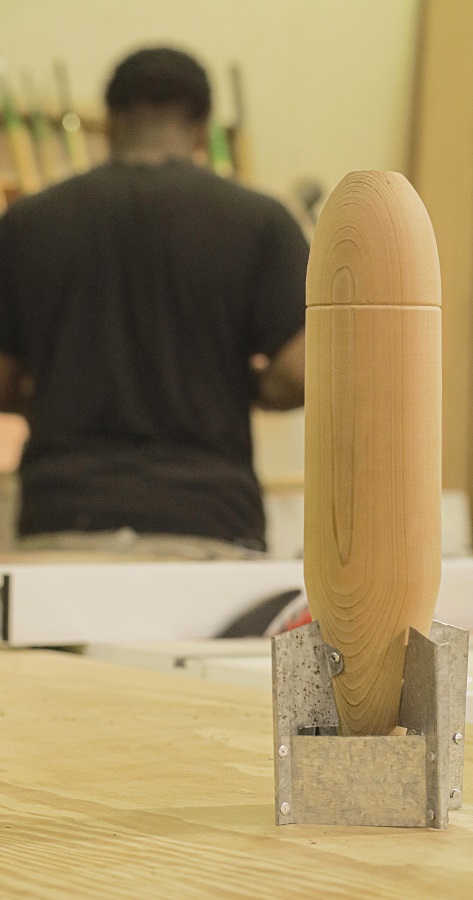